WHY WAS POPE FRANCIS CHOSEN TO INAUGURATE THE PROTOTYPE SCHOOL OF SPIES IN MOROCCO? 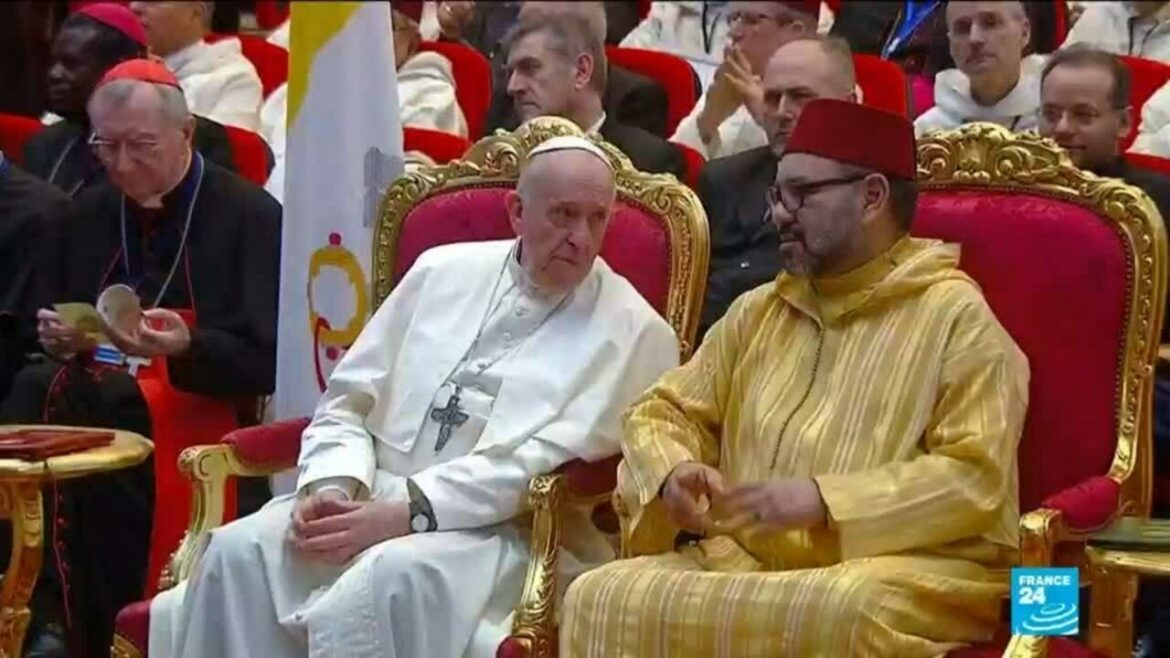 Pope Francis – whom I respect for his important position, was chosen by the West as a political emissary to inaugurate a prototype school for training agents and spies for the West in a religious disguise. Why was the Pope sacrificed to embark on this mission?

Again, the Pope was not concerned about the perfection of Quran memorization, Quranic exegesis, Arabic language, the preservation of the oral chain of transmission of the holy text, and so on and so forth. After the separation of the religion – church, mosque, synagogue – from the state, which was a transitional period from the French Revolution onward, the West has entered a new era. The religious clergy should not be excluded any longer from the affairs of the state. Rather, they should be used for the benefits of the state, even if this requires to change the religious texts and interpretations, as Pope Francis attempted to do with the Bible two years ago with regard to the definition of marriage, and as many Muslim thinkers are attempting each and every day with many, many ridiculous political issues. Whoever resists, the West has prepared a labeling for each group already, whether they are Muslim, Christian, or Jewish.

To start off, the western democracy, which, if not invented, was developed by the British, and then adopted by the American Empire, is a political system which typically avoids responsibility and accountability. It is a political system of 1001 faces. If you are upset and angry at one face, it can be manifested by 1000 more others. We have to admit that it is one of the smartest political systems ever existed.

In my view, the Pope was chosen for one simple reason. In order to cover up the mission of the school, and in case, people come to realize the fatality of that school, they should not blame the West or democracy, but the Pope, as it has happened with many other state crimes and genocides, which have been committed by western governments, but the blame has gone, you guessed already, to the Catholic Church. I am not trying to defend the Catholic Church here, or the Pope. I am trying to defend the truth the way I see it.

This idea of manifesting itself through the Pope, through a local government, local leader, religious leader, a king, or even as an NGO, is typical for the western democracy. The reason is clear. When people get upset with the unavoidable injustice, they should not blame the West, in this time and age, the USA, but that particular manifestation, i.e., the Pope, the local government, the local king, the church, the mosque, a religious leader, an NGO etc.

For example, in Albania, we had a five-decade government that banned religion, changed our language, covered up the past, turned the population from free people to recruited spies, killed the elite, raped our women, stole our land, stole our wealth, and turned Albanians into the most humiliated nation of Europe, but our American allies say, “we had nothing to do with Enver Hoxha. We simply gave the nations after WWII the right to choose their leaders and the political system they prefer. We simple give people the freedom of choice.”

Yes, indeed, Albanians chose Enver Hoxha, who was supported by the British and American military. Did we have a choice to reject him, when in my region, for example, a military general of Enver Hoxha, Mr. Shefqet Peçi – Minister of Defense during the communist regime, killed in my region 21 people just for fun in 1944, without even resisting. One of them was my grand, grandfather, Qamil Tola. He was a young man, the father of four minor children. He was invited to participate in a meeting with General Shefqet Peçi. In the most betraying form, they were shot in front of their wives and children. Later on, the government apologized, but 21 men were killed innocently.

This is the choice that our American allies refer to. The terrorist regime of Enver Hoxha was supported by the British and American Empire, as was the case for Ahmet Zogu and Fan Noli before him, who all had one mission: to destroy the Albanian nation. Ahmet Zogu was no better than Enver Hoxha at all. He in fact paved the way for installing Enver’s horrible regime. King Zogu killed and imprisoned the political and religious elite, and stole the wealth and the gold of Albanians. Once the mission was done, he escaped. He traveled to, you guessed where, to London.

Our British and American friends tell us to blame Ahmet Zogu and Enver Hoxha, the same as they are going to tell the Moroccan people to blame the Catholic Church and Pope Francis for opening the school of spies in Morocco.

Unfortunately, Pope Francis was used to inaugurate another similar building: the Abrahamic Temple in the United Arab Emirates. This temple is supposed to bring together all mankind under one religion who has one major similarity with Islam, Christianity and Judaism: that is, the name Abraham; hence, Abrahamic Temple. Surely, the content of this new religion has nothing to do with Abraham himself or with the God of Abraham.

Beware of the prototype school of spies of Morocco. It is dangerous. It is supposed to bring wars and exploitation, slavery and misery, not peace and prosperity. Humanity knows what brings peace and prosperity, tranquility, and the beauty of spirituality. There is no need for unfettered political experiments.

To conclude, I respect the Pope; I respect the Arab people; I respect the American and British people and their political system; I wish the best for everyone, but let’s not transgress the common sense. That school in Morocco should be closed down immediately. The West made a big mistake. The Pope should not apologize. He was forced to do that.

THE MASSIVE SEXUAL RAPE IN ALBANIA DURING THE FIVE-DECADE REGIME