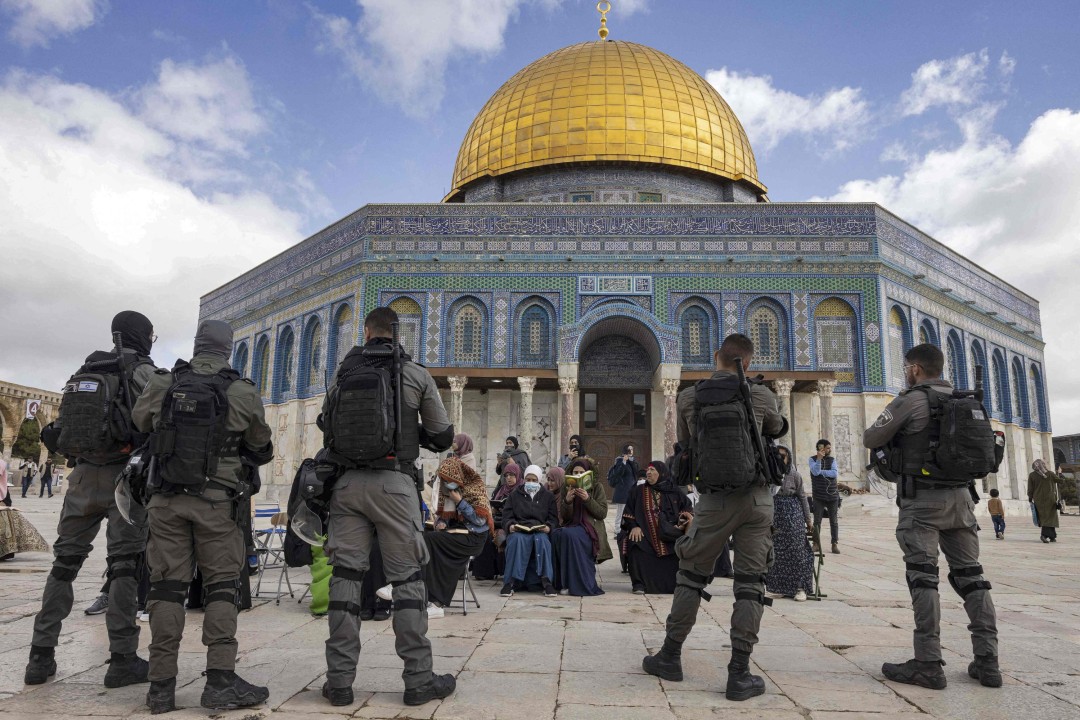 Over the last seventy years, the topic of Palestine and the conflict with Jews has been central to Muslims. Headlines and news about the Palestinian conflict have never ceased hitting the Muslim audience. In addition, Jews have never been more overestimated than during this period of history, and many narratives, fake or real, have been spread about them, such as, they own banks, control the world, control big companies, the Jewish lobby in America is very powerful, they own this or that neighborhood in London, they control China, so on and so forth. There are books written about their legends and myths. And yes, Muslims, all too many of them, believe in such nonsense, which reflects a state of ignorance and stupidity of us, contrary to what the Quran and the Prophet Muhammad (peace be upon him) encourage us to be.

In order to put things into perspective, I would prefer to give an imaginary scenario, which actually is a reality for many people. Let’s suppose that one has a conflict with the government or he or she is on the list to be persecuted or discriminated, for political or ideological reasons, no less. In this case, there is a very powerful entity, which is the government, and the targeted individual. A smart government would never attack that person directly, nor would it make it clear that the attack is taking place for ideological reasons, because this makes people aware of the injustice, which, as a result, will increase social cohesion against the government – something that any unjust government fears the most. Rather, smart governments use other people to attack that individual for apparently personal reasons, while it is orchestrating everything behind the scenes, and it always appears as a hero or as the entity which is trying to ‘solve’ the problem. Governments always try their best to keep their hands clean, especially the modern secular ones.

In this particular scenario, even if the person who is being attacked starts to think carefully about the problem and why he or she is being attacked, or who else might be involved, the government will use other spies to come and distract that individual, remind them that the enemy is merely the other person, that there is nothing complicated. In fact, they even will be encouraged to not use the brain, but use violence against the adversary. Neve will they ever be reminded that actually the real enemy or the real actor who is playing behind the scenes is the government itself.

This is a very common technique used by modern governments, especially in the West, which persecutes and discriminates people, yet they like to appear clean, and democratic, and even act as heroes that are trying to help the ‘oppressed’ citizens, who are the victims. In fact, I dare say that this technique is typically used by the British Empire and its puppet governments around the world. If there is one thing which can describe the modern governments – such political entities created by the British Empire, the best, that is, the lack of responsibility. Modern governments are masters of avoiding responsibility. The whole British political system revolves around the concept of irresponsibility.

Moreover, this technique is widely used by the modern judicial system, which more or less is applied worldwide. Judges, for example, could clearly reach a verdict based on political reasons, yet they, in cooperation with the intelligence service, will coordinate everything to appear as if they have no choice, as if it is the law which conditions the verdict, while, in fact, the unlimited power that they enjoy allows them play politics. Even in such as case, when the judicial verdict is given, unjustly and based on political reasons, the intelligence service will use spies in order to distract the targeted person. Spies – who could even be family members, will tell him or her that there is nothing political in this case, that judges had no choice, or whatever, but never will they ever mention that it is the government behind and that judges are doing its biddings.

For immoral and unethical modern governments, void of any code of morality, this technique is utilized the most. Whoever has dealt with courts of law in the West, or they think that they have been targeted politically, for sure they know exactly what I am talking about. Judges and governmental employees are masters of applying such techniques. They are experts on this.

Back to the issue of Jews, The British Empire uses exactly the same technique against Muslims in a larger scale, but the logic behind it is the same. As a historical fact, the Ottoman Empire was brought down effectively during WWI by the British Empire and its puppet allies, such as France and Russia. Officially, the last Muslim caliphate was abolished on March 3, 1924. For the first time since the foundation of the prophetic state of Madinah, in 622, in the Arabian Peninsula, Muslims were defeated and their caliphate was taken away. The dissolution of the Ottoman Empire was not an ordinary matter for Muslims; rather, it broke apart one of the largest communities of the world. The British occupation of the Muslim lands did even make things worse by splitting the Muslim population into some sixty states and in each of which is assigned a puppet ruler.

In short, Muslims are under the British occupation. The people who once had give rise to one of the greatest civilizations of the world, who had contributed tremendously to the development and the advancement of the human civilization, those who practice a religion which has been strictly preserved and which encompasses every aspect of life – including the social and political and economic ones, have fallen under the British rule. At the very least, one can say that there is room for a big political struggle. On one hand, there is the British Empire which is holding so much power, more than it can afford, and, on the other hand, it is Muslims who have all the capacity to fight for freedom, and they have the political capacity to rebuild their own caliphate.

Like that corrupt government or judge that uses the technique of distraction and hiding-behind-the-scene when they persecute an individual, the British Empire uses Jews and the state of Israel against Muslims, who are conditioned to focus their attention on an imaginary or proxy enemy and forget the real one. The Palestinian conflict is disproportionally over exaggerated. The media speak about it, and the Arab leaders and many Muslim activists have the license by the British Empire to speak against Jews. So much time and energy are spent on this issue.

No one denies the fact that the Palestinian conflict is real. There are victims. Children are killed. Innocent people are imprisoned and left to starve to death. However, this is not a sufficient fact to draw the conclusion that the biggest enemy of Muslims are Jews. It is not appropriate for a Muslim, who believes in Allah and in the Last Day, to be fooled and deceived by the appearances. Muslims are required over and over again by the Quran to use their brain and to see what’s beneath the surface.

There is no doubt that Jewish soldiers are killing Muslims, but they are simply being used by the British Empire. Jews are pawns. The Jewish community is a very small community compared to Muslims. How can less than twenty million people be compared to a community of approximately two billion?! There are at least a hundred times more Muslims than Jews in the world. Jews are not even a match for Muslims. It is an insult to really say that Jews are the enemies of Muslims. Rather, our enemy is the British Empire with all its puppet states, such as the USA, EU, Russia, China etc.

To make the narrative more believable and seem real, there are books written about Jews, that they control everything. There are fake protocols spread by the British enemy to prove to Muslims that Jews have some hidden agendas against Muslims, that they want to found a state from Nile to the Euphrates, while the British Empire controls the Muslim lands from Morocco to Indonesia.

In order to make the Jewish community even scarier for Muslims, there is propaganda that portrays them as very smart people, who have on average a very high level of IQ. This is all rubbish. I would never believe that there is any community in the world which has a genetically disposition to have a higher level of IQ than others.

The Jewish community is relatively a very small one, especially compared to the large community of Muslims. Historically, they have had a very good relationship with Muslims, and they’ve lived peacefully in our lands while the European Christians persecuted them. Even today, the Europeans are simply using them as pawns against Muslims in order to keep them distracted while our community and our lands have been occupied by the British Empire. For the smart British rulers, it is not in their best interest to manifest the occupation of Muslims because this leads to a cohesion of the latter. The British rulers don’t want to raise awareness against themselves.  As a result, Muslims are kept busy with imaginary enemies, such as Jews, Zionism, Nazis, UFOs, bankers, Rothchild or whatever the enemy spouts. At the same time, by emphasizing the occupation of Palestine by Jews, Muslims forget that all their lands are in reality occupied by the British Empire.

Jews could hate Muslims. This is not something strange. The Quran has reported their hatred towards Muslims, but it has also reported a bigger hatred, that of pagans towards Muslims. Jews are much better in the sight of Allah than pagans. I personally would marry a Jewish woman, as my religion allows such a thing, but Islam prohibits the marriage to pagans. Muslims should not be fools and ignorant. We have forgotten the real enemy, i.e., the British Empire, which is a pagan and atheist empire, and we are conditioned, by the enemy and our spy leaders, to focus only on Jews.

The western barbarians – the British Empire and the US Government