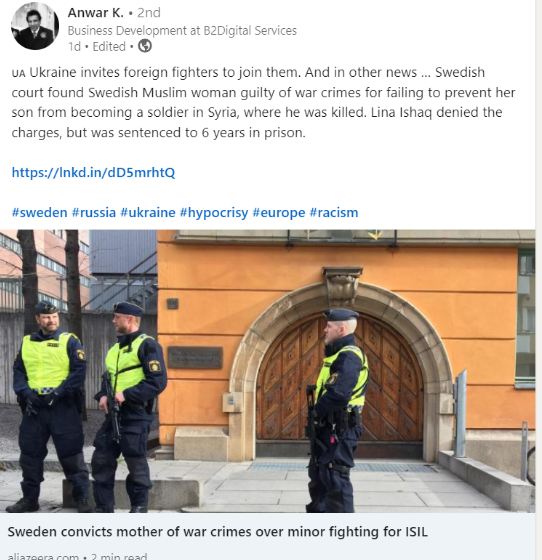 The irony is that, on one hand, people were encouraged to go to Syria to fight, then they were betrayed by making the participation in a war of a foreign country illegal.

This happened exactly in Albania and many other countries.

I remember back in 2013 in Albania, the new prime minister in his inauguration speech in the Parliament dedicated a good portion of it to the situation of Syria and the Butcher of the Middle East – referring to Bashar al-Assad. Many Muslims felt emotional and travelled to Syria to fight against Bashar al-Assad.

In 2014, the law changed in Albania. The same prime minister introduced a law with retrospective effect, which made it illegal to participate in wars of foreign countries, particularly in Syria.

More than 8 people were arrested in Albania and some of them were sentenced up to 18 years of imprisonment for charges similar to this woman.

This is the western democracy in Albania, the democracy of betrayal and backstabbing. The same individual who betrayed Albanians, he still continues to serve as the prime minister of Albania.

This is the reason I never trust the West on anything. They are backstabbers and deceivers. They treat us like idiots. What happened in Albania was mind-blowing.