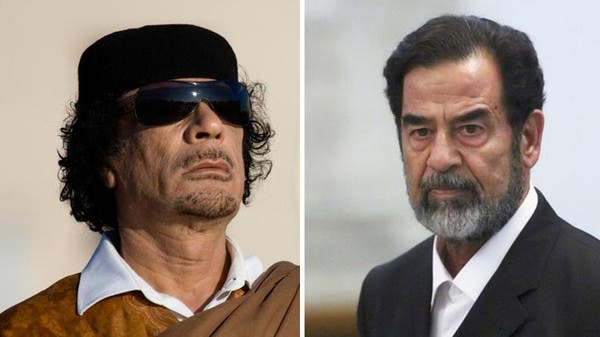 In 2003, Iraq – the cradle of civilizations – was invaded by the US military in a spectacular way; almost there was no resistance at all, as if there was no military, no government already in Iraq, and indeed, as if there were no men living there.

In 2011, some 2000 km away from Iraq, Libya came to an end, exactly the way Hillary Clinton put it, “we came, we saw, he died,” as if this country had no foundation and no military – like a desert tent blown away by wind.

Moreover, what surprisingly and interestingly makes these two events, i.e., the invasion of Iraq and the dismantling of Libya, similar is the way both leaders were captured, and arguably executed. Despite the fact of being famous leaders, strong, popular, scaring the world, sponsoring revolutions etc., both were captured in the most humiliating positions; Saddam was captured hiding in a hole while Gaddafi was fleeing like an amateur soldier forced to go to war. Both were captured as cowards, without any resistance.

This also reminds me of another leader, that is, Ahmed Zogu the King of Albanians, who fled in 1939 when the Italian fascists attacked Albania. He left the country like a whipped dog, as a coward.

Both these three men were Muslims, or at least represented Islam or Muslim countries.

Fast forward to Ukraine 2022, we find a completely different Hollywoodian image. A great leader who is inspiring the world with his courage. Different from Iraqi and Libyan people, Ukrainian men are sending their wives and children away to safe places while they are fighting a fierce and a patriotic war against Russia. The whole world – at least those who watch BBC, CNN and the likes, is marveling at their patriotism; even beautiful women are participating in this war wearing full make-up, no less.

My intention is not at all to ironize the war in Ukraine and express a sense of objection to the image of Saddam Hussein and Gaddafi. I am merely trying to depict the reality and debunk the western disgusting propaganda.

All these three countries were run by western puppets who were given a precise role. As Muslims, Saddam Hussein and Gaddafi had no choice but to play the role of a coward, escaping like idiots – no real man would really choose that ending. This shows how controlled these people were. The same did the King of Albanians Ahmed Zogu, while the Ukrainian comedian is given the role to play the hero.

According to the western propaganda, Muslims – who are ideologically and historically fearless heroes, they should be depicted as cowards and whipped dogs, while Ukraine should by depicted as an inspiration of manhood and bravery; the media is even going back to the patriarchal image of the society when needs be, and I am not trying to underestimate Ukrainians at all.

The western propaganda is absolutely disgusting. I hope I can elaborate more on Saddam and Gaddafi and their puppet roles given to them, as well as their demise.