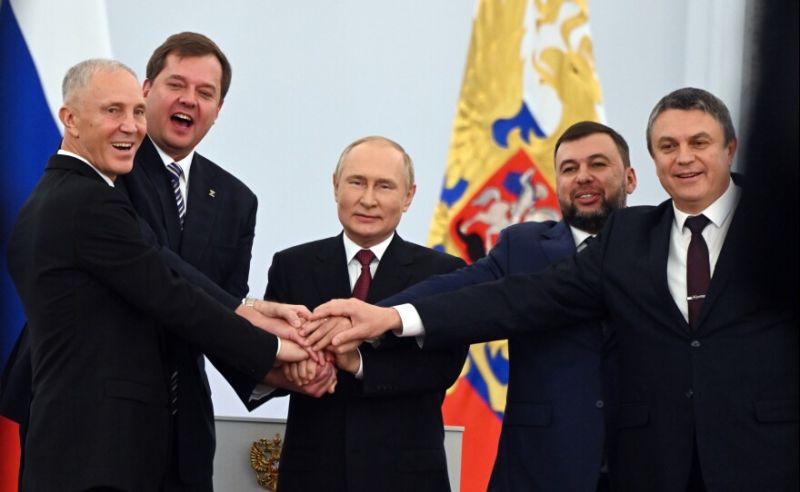 That what we all were ‘afraid’ of just happened yesterday – Russia annexed four Ukrainian regions. This was announced by the Russian President at a signing ceremony. The West has unanimously condemned this last move of Russia. Interestingly, the list of countries condemning the occupation of the four Ukrainian regions by Russia includes also the corrupt and illegitimate Government of Albania, which is selected and supported by the US Government.

In order to understand the political consequences of what took place in Kremlin on September 30, 2022, we have to go one step back and look at the world’s political landscape in a bigger picture.

In this regard, the world is more united than ever despite the fact that it appears to be divided into two major camps. It would be more than naive and counterintuitive to expect the world’s leaders to sit down together and cherish the idea of a world government, even though the UN shows just that. Even from a logical point of view, if the British Empire rules the world, as it is the case, the best strategy is to rule through puppet governments, which appear as independent, because this absolves the Empire from responsibility, and it prevents people from getting united against the worldwide British occupation.

Even though formally the world seems divided into countries, which, on the other hand, are divided into two major camps but not limited to that, it is united and ruled by one power, indeed. In order to understand this, one is only required to be logically consistent, and look at what lies underneath the surface.

Speaking of Russia, for example, let’s look at the facts. It is a country that has executed its king in 1917 and imported a western ideology, that is, communism, which is actually a British political ideology. Ever since, this country has been ruled by a secular and non-transparent government – a group of individuals that have no real connection with the Russian people and no best interest for them. Again, Russia is ruled by a British ideology and political system, not by a genuine Russian ideology.

To conclude, the annexation is made only to feed into propaganda, to support the idea that the world is divided, and more importantly, to consolidate the biggest lie of the modern time, that is, national independence. The world is more united than ever. Borders are drawn only to contain and suppress people, not to free them, including those in Ukraine. The British Empire, alongside the US Government, continue to rule the world with an iron fist.

This sham of independence should be exposed. We sick and tired with such games of the corrupt US Government and the British Empire.

In reality, there is no such a thing called independence.