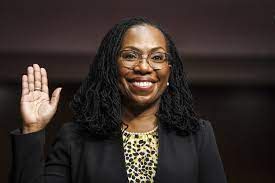 This is Ketanji Brown Jackson, a justice of the US Supreme Court, appointed to that position by President Biden. While Biden trusts her with the lives and the future of the American people, I wouldn’t trust her to clean my backyard. Seriously, I wouldn’t trust her because she has no opinion on anything. As a judge, she does not know what she is going to say in the future because it depends.

When she was asked to give her opinion on what a woman is, she refused to give an answer because it depends. The answer depends on what the state or her bosses tell her in the future. This is the individual that Joe Biden says she is independent.

I cannot hire her to clean my backyard because for her everything depends. She might cut trees down because the state might tell her that trees are dangerous. If she were to be asked about apples trees if they’re good or bad, she would say, “It depends.” Yet, the American despotism tells us that she is independent.

Don’t such people have any shame?!

With all due respect, she is not independent. An independent judge is the one who has a clear opinion, who is opinionated, especially about the most agreed upon facts of nature. Her primary job is to deal with women and men, yet she cannot make the difference between the two. Why? Because it depends on what the state tells her.

A true and independent judge is the one who refuses orders from despots and politics. If she is told to define something in accordance with what politics requires, she goes straight to the President, slaps him and spits on his face and leaves her job. Can Ketanji Brown Jackson do that? No! She is trained to do exactly the opposite. Her primary job is to obey politics. She is ready to define things and write laws exactly what politics and despots tell her to do.

Will Ketanji Brown Jackson prefer prison before bowing down to political order? This does not even occur on her imagination. Modern judges are tried officers to obey any order from politics and despots.

Can we imagine a British judge refusing to obey orders of the British monarch? Seriously, isn’t that what an independent judge is supposed to do?

Have you ever heard of a modern judge in the West who has left the job because he or she did not agree with a law or a political stance, or a political order? I haven’t heard myself. There is none because modern judges are the embodiment of dependence. In fact, they have gone through intensive training on how not to disobey orders, how not to be independent and have their own opinions.

Coincidently, there is another famous group of trained people who refuse to give their opinion on anything, and that is, spies and agents. The most important quality of a spy is not to give their own opinion. Their job is to obey every kind of order.

The modern judges don’t have their own opinion because they are controlled by the state. They are spies and agents.