The diagram of the ideological landscape of the world 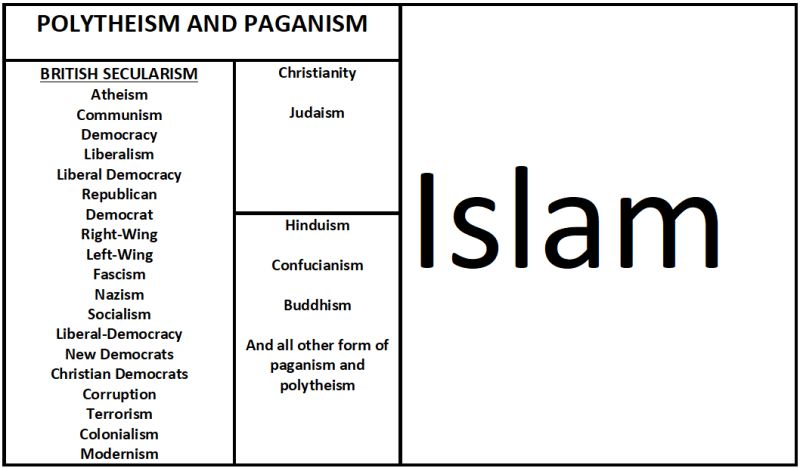 If I were to illustrate in a diagram the ideological landscape of the world based on Islam’s perspective, this is an example. The religion of Islam keeps things simple and clean, as simplicity and clarity are beautiful. Islam divides the world into two parts: truth and falsehood, positive and negative, existence and non-existence, good and evil. The British Secularism, on the other hand, recognizes exactly this division, as it is the reality, but all too smartly, it insists in replacing the correct division with other misleading ones, such as: republican and democrat, liberal and conservative, left-wing and right-wing in order to dominate the world ideologically. When one is fully immersed in the corrupt British secularism, it gives the impression that the whole world revolves around it, as if there is nothing outside it. It is a very smart idea, though, for controlling and brainwashing people. It is a box that locks brains up.

Reality is much simpler and understandable. British Secularism is nothing more than a tiny fraction of polytheism and paganism, which actually happened to be one of the most corrupt political ideologies the world has ever seen. The fact that it has come up with all these subdivisions, such as communism, democracy, liberalism, Fascism, Nazism, terrorism, socialism etc., this does not mean that it is a complicated ideology. All such slogans are invented by the British pagans in order to give the impression that we are dealing with a complicated matter.

It is very simple. Islam vs. Polytheism. The latter has different forms and shapes. One of its most corrupt forms is called ‘British Secularism.’