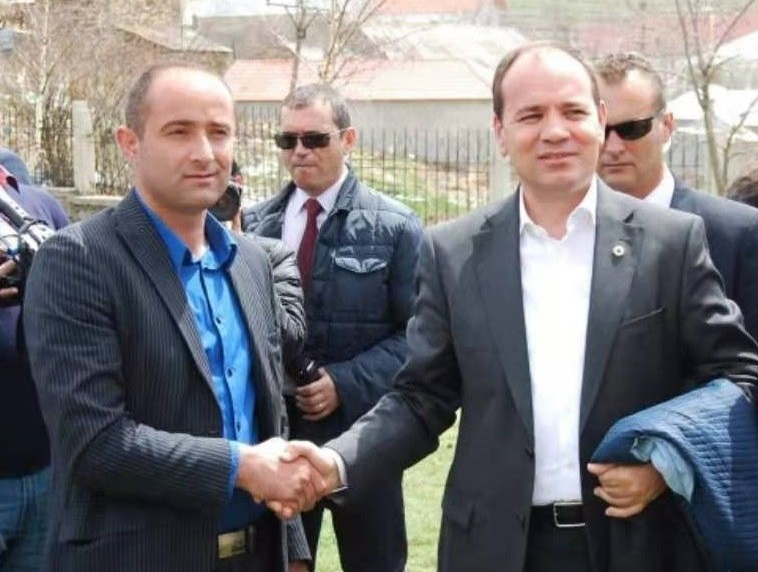 This fella in the picture is the former President of Albania Mr. Bujar Nishani, otherwise known as Yari. In the first picture (on the left), he is with my brother Nderim Lushi on April 26, 2015, where he met with residents of Kukes, Albania, and representatives of the civil society led by Mr. Nderim. On that meeting, a large number of people were gathered to give him a copy of a petition, signed by thousands of people, requesting from the Prime Minister to deal with the crises of the unpaid power bills.

On May 4, 2015, my brother was arrested brutally by the State Police of Albania and put in jail, with the approval of US Embassy. I remember that night vividly when I wanted to contact Mr. Yari about how my brother was betrayed and arrested. To my surprise, Mr. Yari was not in Albania. He had travelled for a visit to New York, an imaginary visit of course.

Some time later, in order to improve his image and hoping that we were going to forgive him, he visited Saudi Arabia (right picture). More precisely, he went there to perform a pilgrimage to the Holy Mosque.

Saudi Arabia, as a terrorist and betrayal country as it is, allowed Mr. Yari to preform an umra (the sacred visit) in violation of the necessary rituals, such as putting on the two pieces of white clothing. Clearly, Mr. Yari was wearing a jacket. Of course, the King of Saudi Arabia – a traitor and a spy, allowed him to perform that visit against the rituals. No other leader to my knowledge has been treated as an exception apart from the President of Albania, i.e. Yari.

Understandably, Mr. Yari wanted to improve his image, or probably he was regretting for what he had done, so he might have been repenting for his betrayal. But what surprises me is the Terrorist Kingdom of Saudi Arabia.

Above all, Mr. Yari taught us a very precious lesson, that I had been completely oblivious before, that Saudi Arabia is a terrorist and traitor country, a country that has betrayed, backstabbed, murdered and let down many, many individuals.

Thank you Mr. Yari for this precious lesson. On the other hand, the Terrorist Kingdom of Saudi Arabia should get ready to remove its embassy from Albania. You’re not welcomed in Albania. Albania does not need to have a diplomatic relationship with terrorist countries; with countries that survive on backstabbing and treason.

Saudi Arabia: remove your embassy from Albania. You’re not welcomed.