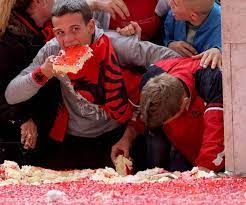 To begin with, the economy is not independent and autonomous, and I don’t mean here in the sense of import-export. Definitely, importing goods and services from other countries and exporting to them is necessary. The adverse aspect is that countries are not free to produce and manufacture whatever they can and want. For sure, small countries have the ability and capability to manufacture cheap cars and building material to satisfy domestic demand. However, Albania, for example, is not free to do that, partially because the government is subservient and partially because there are international agreements, albeit unfair, but the bottom line is, countries are not economically independent. The national independence serves no purpose in terms of the economy.

As for the military, I believe this is the most obvious form of control and dependence. Small countries are not allowed to have the right to manufacture weapons independently, especially Muslim countries, and that they should not have the right to build independent forces. We all know the case of Iraq, which was invaded under the pretext of having or being able to make weapons of mass destruction, which resulted into a lie; nevertheless, this shows clearly that countries cannot have independent military.

However, there is only one aspect where independence has full meaning and countries are allowed to apply it fully, that is, the lack of the freedom of travel and employment. People from small countries cannot travel or work or study in other countries. They need a visa. Of course, a citizen of Iraq or Gambia or Albania cannot just purchase a ticket and fly to Massachusetts or London for tourism or work. They need a visa, which is very difficult to obtain one.

So, what we call ‘independence’, that we celebrate so massively each and every year, has only one function: to restrict people’s ability to move around the world and to work in other countries. When it comes to the economy, education and science, and the military, these are not independent; rather, any attempt to do something independently in one of these sectors, this constitutes an act of terrorism, which will activate the UN Security Council immediately.

Clearly, independence means deprivation and restriction, not development and more rights. Maybe it takes some courage to understand this, but this is the truth.