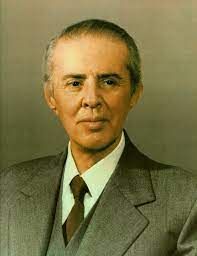 As the history of the Balkans is perplexing and unclear to many people like me, who seek to know and understand better the complex reality of the current political and social condition of Albania, the name of Enver Hoxha and what hides behind his image can help solve the puzzle of the historical truth, which continues to hold the Albanian society hostage in the 21st century, a society whose trauma is not overcome yet.

When talking about the history the 20th century, especially regarding political issues of any country, I think we should agree that nothing has happened coincidently and accidentally. This is the most basic premise that can help us provide a satisfying explanation. In other words, a political regime, such as Enver Hoxha’s, did not hold Albania hostage because he happened to be on the right place and time, or because no other man other than him volunteered to do the job, so he found a vacant political position posted online; rather, everything in politics is planned and in accordance with a clear international political agenda. Local politics is not isolated from the international agendas. This is the nature of power: it is not local, especially in the modern era.

Thus, giving a concise and compressed description of the regime of Enver Hoxha is impossible, for his damage to the Albanian people is tremendous and irreversible; however, depicting his regime with a few words would simplify the clarification of his vicious role.

Enver Hoxa did to the Albanian people a massacre. I am not referring here to bloodshed only, even though that took place; I am referring here more to the ideological catastrophe. While the way for undoing the history of Albania and rendering the society a brand new one was paved by the likes of Fan Noli and Ahmed Zogu, Enver Hoxha executed the plan. He killed the old elite, standardized the language reflecting his political agenda, outlawed religion uniquely in the entire world, turned the country into a natural internment camp, gave people no choice but to become members of the secret service, censored intellectuals, supported the most obedient and immoral people of every city, village or tribe. After four decades, the result was terrifying: he made a new human being as if made by a 3D printer. The new Albanian citizen was frightfully a zombie.

I personally find no other words to describe this regime but as terrorist. It is necessary for Albanian society to consider the regime of Enver Hoxha as terrorist in order to give us the psychological momentum to create a distance from it.

At the same time, it is time to ask the right question about this terrorist regime, which caused to the Albanian society a worse damage than what the US invasion did to Iraq, for instance. Albanians need to know who supported financially and military this terrorist to come to power. If not the USA and the British Empire, who else had the audacity to do so?