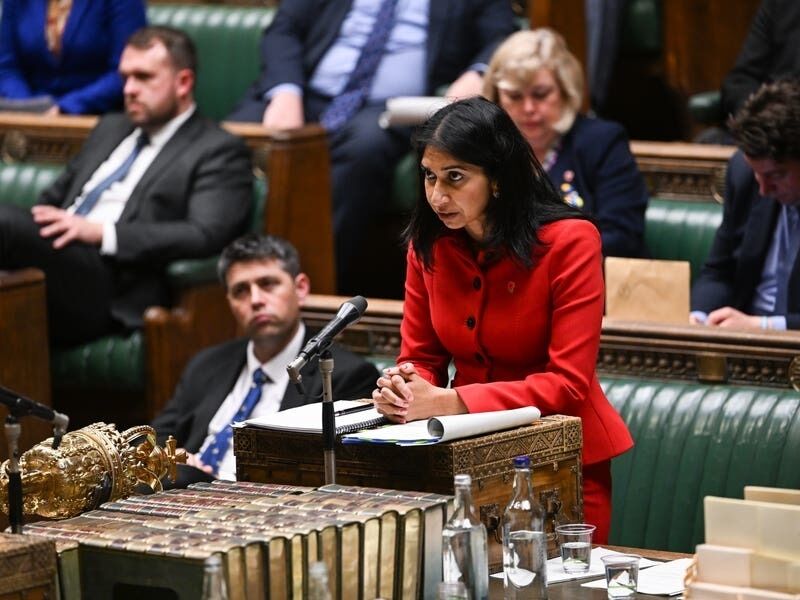 The UK Home Secretary, the corrupt Suella Braverman, who is part of one of the most corrupt and immoral governments in the world, has made a big fuss about a recent wave of Albanians immigrating to her country. This corrupt individual has described Albanians as criminals.

Based on informal information from people that I know, many regular Albanians have been encouraged by the intelligence service to immigrate to the UK. So, we are not dealing with a random and unorganized immigration of Albanians to the UK; rather, there has been a cooperation between the Albanian Government and the UK counterpart.

Suella Braverman is simply trying to cover up this fact.

There could be a couple of reasons why the UK Government wanted a number of Albanian citizens to immigrate to UK. Most probably, in my view, the purpose of this project was to vilify and target the Albanian people, humiliate them, and portray them as criminals, especially given the fact that there is a clear historical conflict between the barbaric British Empire and the Albanian people, who were part of the Ottoman Empire.

Let’s not forget that it was the army of Muhammad Ali of Egypt – a true Albanian hero, who defeated the British army at the beginning of the 19th century. The British barbarians retreated humiliated from the land of Egypt.

Unfortunately, in 1912, Albania was occupied by the British pagans and our land continues to be ruled by such barbarians.

The barbaric British Empire cannot take the criticism when Albanians speak the truth against this corrupt empire. Instead, it chooses to attack and backstab them.

The corrupt and immoral Suella Braverman should know very well that Albanian are not criminals. In fact, they are those who two hundred years ago taught the British barbarians a good lesson. They are those who, under the Ottoman Empire, were the terrifiers of the European barbarians.

The corrupt and immoral Suella Braverman should know that Albanians are not criminals. Rather, they are hardworking people, trustworthy and people of honor. We are in this condition because we have been occupied by the barbaric British Empire since 1912. We’ve been oppressed, killed, murdered, and betrayed over and over again by the corrupt British Empire.

The corrupt and immoral Suella Braverman should know that Albanians were directed by the intelligence service of Albania and the UK to come to your country, but you betrayed them, by calling them criminals.

I personally would advise Albanians not to immigrate to the corrupt UK. It’s a country of espionage, corruption, oppression and humiliation. Albanians should not leave their own country. The British thieves cannot be trusted.