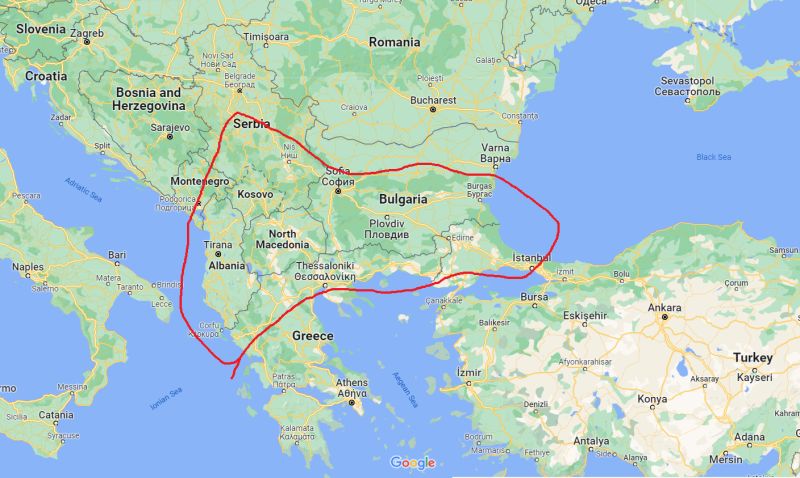 This was the territory where Muslim Albanians dominated before WWI, which de facto brought the Ottoman Empire down. Our grandfathers, for example, from the region of Kukes, where I am from – northeast of the current republic of Albania, would talk about the annual migration of sheep from our regions to Saloniki during winter. The year 1912 was a sad year. Albanians were defeated. The Ottoman Empire was about to come to an end. All too smartly, the British Empire and its European mercenaries drew a minuscule country on the map and called it Albania, as a strategy of humiliating the people of Muhammad Ali Pasha, by portraying them as inferior in the Balkans, while they were the grand viziers of the Ottoman Empire.

The Conference of Ambassadors of London in 1913 did only convene to create a political map of the Balkans which would render Albanians not simply as defeated, because that could have united them anyway, but split and divided.

The British Empire is the master of propaganda. Instead of telling Albanians that they were defeated, it presented itself as a savior of Albania. It created a minuscule Albania around the mountain of Kruja. It also came up with some mythological names, such as Skanderbeg, where he had fought so bravely against the Ottoman Empire centuries ago out of some caves of Kruja.

The British Empire played a smart game, so much so that even today Albanians are confused. We take the very tricks of the enemy as gifts. We think that we are proud of being called the people of Skanderbeg, but we don’t think carefully of what it means.

Let’s put it this way: Albanians were the superpower of the Balkans; they were the grand viziers of the Ottoman Empire; Muhammad Ali Pasha and his dynasty were the rulers of Egypt, Sudan, Hijaz, and Levant; in short, we were a power of Europe to be reckoned with, and we had defeated the British army and Napoleonic army in Egypt. Therefore, it all makes sense by creating a small country around the mountain of Kruja and telling the defeated nation of Albania in 1912: you have no history; you should feel proud of a lie that we have invited for you called “Skanderbeg of the caves of Kruja”.

Strategically speaking, what the British Empire did was very intelligent. It was the best way of controlling the Albanians in a sustainable way. It is similar to occupying the Great Britain today, and meanwhile forming a new Great Britain in Norfolk and telling the people of that region that in reality, you are the famous Great Britain, while the rest of the population are murdered, divided into other countries, and forced into exile.

As if Skanderbeg was not enough as lie, the British Empire had to manufacture another national symbol for Albanians, that is, Mother Teresa. The country of grand viziers and the largest Muslim population of Europe is represented by two Catholic figures: Skanderbeg of the caves of Kruja, and Mother Teresa of Kolkata.